Daniel Slotnik, whoever you are, you should be ashamed of the rotten New York Times obituary you wrote about my old buddy Thom Steinbeck.  Your first sentence includes the word “bitterly,” your only quotes from other people are from his father’s biographer disparaging him, and there was not one word about what a funny, fun-loving, boisterous, jovial storyteller Thom was.  Not one.  All you did was rake as much muck as you could find on him, then do your best to give him a final drowning in the shadow of his larger-than-life father.  I assume you were assigned to write the obituary and never met the man.  You should be ashamed of yourself.  F. you, Slotkin.  (btw, that’s for Thom — he would appreciate my saying that for him) 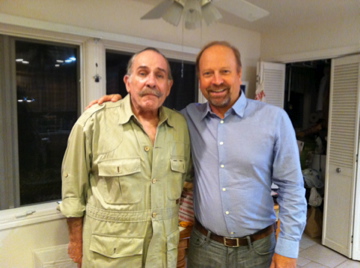 Me and a barrel-chested man.

What made Daniel Slotnik feel the need to stomp on the grave of John Steinbeck’s son, Thom Steinbeck who departed the world last Thursday?

His obituary is nothing but muck, raked back and forth.  There’s no quote from his wonderful widow, Gail.  There’s no quotes from his good friends.  Yes, he was engaged in plenty of legal battles.  So what.  He was a fun and generous person who supported veterans and workers groups vigorously.

And by the way, Slotnik, you overlooked the definitive statement on Thom to make your rotten case against him in death — the slender supplemental volume by Jackson Benson, Steinbeck’s biographer.  It was titled, “Looking for Steinbeck’s Ghost.”  When I first moved to L.A. and went in search of Thom I began by checking out Benson’s biography which I had heard was massive.  I saw the Jackson Benson name on the spine of the thin book and wondered as I checked it out with a stack of other works on Steinbeck how “THE” biographical work on Steinbeck could be so small.

When I got home I realized it wasn’t the biography.  No, the biography is indeed 1,184 pages.  The “Ghost” book was a separate essay he wrote after completing the biography.  At the start of the smaller book he explained that he wrote it as almost a public service to all future biographers of famous people.  What he wanted them to know was about the horrendous battles, conflagrations and befuddlements he had to endure in dealing with the descendants of John Steinbeck, most prominent of whom was his son, Thom.

So there, Slotnik — you might as well have at least hit the bullseye by citing that work.  No, there was nothing wrong with any of the facts cited in your NY Times obituary.  It’s just that there was more to the man — a human side — that I now want to share because I was so fond of him.  Here we go.

I met Thom in 1994 when I first moved to Hollywood.  I had to meet him.  I had grown up as a marine biologist transfixed on his father’s book “The Log from the Sea of Cortez.”  It was my density to meet him (and yes, I said density, an oblique reference to “Back to the Future” to show I will be infusing this piece with humor, something the NY Times obituary lacked, severely).

I was in a writer’s group where a woman was listing the other clients of her agent with Gersch Agency and mentioned his name.  I had her give her agent a letter to Thom from me.  A month later a “producer” (I found out later actually just one of Thom’s drinking buddies) called me up suspiciously.  I made clear I was a poverty stricken marine biologist just starting film school.  I managed to prove I was sufficiently innocent/incompetent and was thus granted security clearance.

A week later I met Thom at one of the swankiest bars in Beverly Hills.  I walked in.  Everyone looked too young and hip for me.  But then I spotted an older guy at the bar wearing a sort of captain’s hat, looking 1000% out of place.  I said to myself, “Please don’t let that be John Steinbeck’s only living son.”  It was, and he was already three sheets to the wind.

To make matters worse, one of the hottest young actress wannabes in my acting class was our waitress.  She kept bringing the drinks, but glaring at me like, “Dude, you’re with THIS old guy?”

We sat there for FIVE hours that first night, trading stories, laughing our asses off.  I drove home obliterated.  He told me stories of love and hate for his father.  He told me about how his brother and he always wanted to rent a tractor and chains and in the middle of the night tear down the statue of their father in the middle of town in Salinas, California.  He told me how much his father would hate EVERYTHING to do with the tourists endlessly honoring and worshipping him — which by the way was already palpable in his wonderful final personal book, “Travels with Charley.”

Thom told me about serving in Vietnam as a combat photographer — he told me he was the only one who shot film footage of the iconic photo of a Vietnamese man being executed (a photo of which won a Pulitzer Prize).  He told me about his beloved brother who died in surgery in 1991 — the person he felt closest to in his life.

A couple years later I was part of his bachelor’s party in LA where we went to Thai food, a strip joint, then a massage place.  A week later I took my buddy Jay Vavra with me up to Pacific Grove to his wedding to his wonderful wife, Gail Knight.  Just last year, as Jay was dying from leukemia, I went up and saw Thom and Gail in Santa Barbara and managed to find a couple of shots of Jay in their wedding photos which I contributed to his memorial service.

Thom and I worked on making a documentary of sorts out of “The Log from the Sea of Cortez” for a couple of years.  We had a number of fairly sloshed creative lunches, then at one point — and I’m sorry, but I just have to share this with some of you who can appreciate the outlandish humor of it (the rest of you can get stuffed) — we typed up a synopsis one day and as a joke he added on the cover page the subtitle of, “A Ribald Tale of Barrel-chested Men and Large Breasted Women on the High Seas.”

A month later he called me up and said, “Olson, I messed up.  It’s all over — I made a boo-boo — I accidentally sent that draft to Elaine” (his father’s third wife who shared with him control of the Steinbeck estate)  “She read the subtitle and wasn’t amused — she said no way will she grant rights to us to make a film.”  Which ended that project, but at least we laughed really, really hard about it.  For years.

In 2003 I brought him to our Shifting Baselines Roundtable Evening in Santa Monica.  At the intermission he told all the scientists they were full of shit — that the ocean was already done, all they were doing was agonizing over the remaining bits, then stormed out angry.  Which of course the next day was followed by a phone call with me where we laughed our asses off, again.

Thom was awesome.  He was of a different generation.  If you didn’t know him you could easily write the sort of pile of crap that Daniel Slotnik has written in the New York Times.

Actually, you know what, the whole journalism world owes the Steinbeck family an apology for the infamous question asked of John Steinbeck at the press conference for his Nobel Prize in 1962.  A journalist asked if he thought he deserved it.  That fundamentally soulless, disrespectful tone matches the NY Times obituary for his son.

Thom was just like his old man.  Not perfect, but deeply caring.  He did a lot of work with military veterans and farm labor groups and lots of other meaningful causes.  He was connected with the land and with working class folks, just as his father sort of tried to be and wanted to be and thought he was, but actually never really was, as Thom confirmed to me.  But at least his sentiments were in that direction.

They both knew bullshit when they saw it.  The New York Times obituary for Thom is pure bullshit.  You want to see the proper, decent, dignified way to write an obituary, Slotnik?  It’s right here, in the Monterey Herald, including a quote from Thom’s old buddy Arlo Guthrie.  Thank you, Monterey Herald.