The National Academies of Sciences, Engineering and Medicine just announced they are releasing a report titled, “Communicating Science Effectively.” A quick search of the report for key words reveals a number of biases in the thinking behind it. I’m sorry, but this is a sad case of the blind leading the blind. Truly it is. 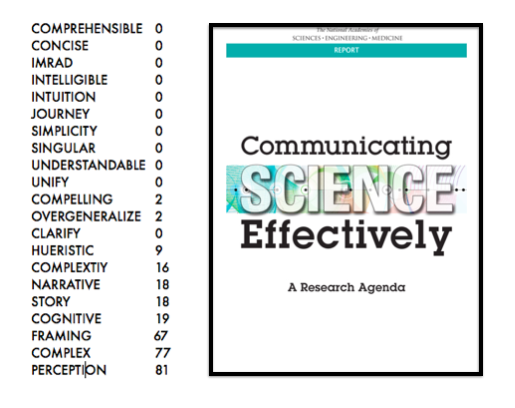 SCORE NONE FOR SIMPLICITY.

LET THE NUMBERS DO THE TALKING

The numbers say it all.  How can you talk about communicating anything effectively and never mention the word SIMPLICITY?  Any mathematician, for starters, will tell you the key to solving problems effectively is to find the simple solution. There’s the age old adage that “simplicity is the ultimate sophistication.” And yet here is a report from the National Academies that doesn’t have even a hint of that thinking?

There is nothing in this report about the need to find singular, unifying themes, or consider science as a journey. There’s not even a nod to the IMRAD template that lies at the heart of the effective communication for research scientists.

And yet … what you do see in the numbers is the word FRAMING mentioned 67 times. What is framing? There’s not even clear agreement on what the term means, much less agreement that it leads to effective communication. It was debated hotly in 2007. It may be the cutting edge of debate among theoreticians, but then if that’s so, the report should have had been called “Communicating Science Theoretically.”

This report is so vastly mislabeled. I don’t want to ridicule it, I just want readers to know that as the science community complains about not being heard, this is where large amounts of effort are going.